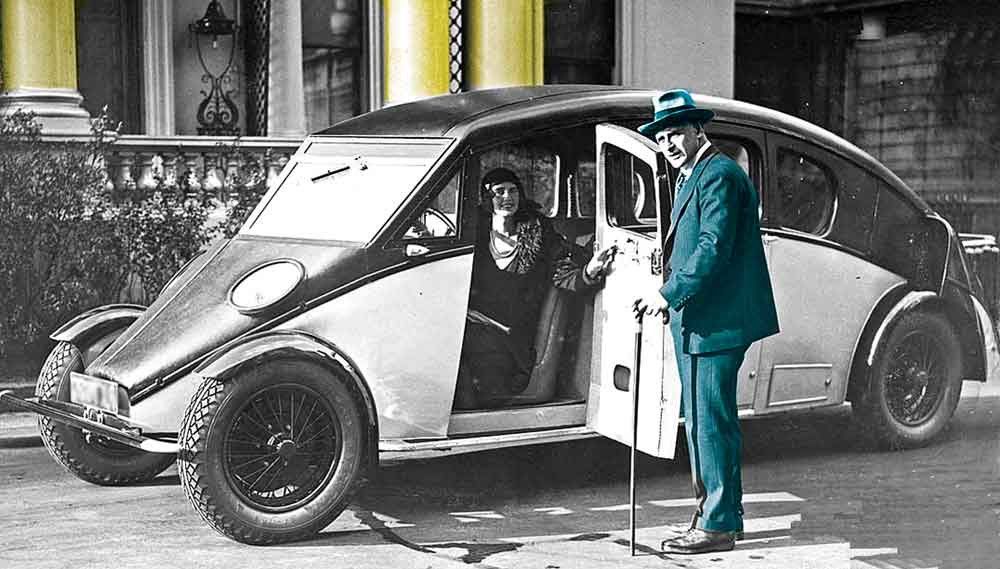 The Bourney Streamline was the brainchild of Sir Charles Dennistoun Burney, an aristocrat, MP and aeronautical engineer with a flair for imaginative invention. He had already worked on airship design, notably the R100 and R101 which came to such a tragic end. He was however a passionate advocate of streamlining and he decided to prove that designing a car using aerodynamic principles would result in better performance and economy. Unfortunately, although he was a very competent aircraft designer, the transition from aeroplane to car was a little too great a step!

Most of Burney's fortune was built on the sale of patents and it has been claimed that he only built his cars in order to get publicity for them. As it was only a dozen cars were created, every one different, and it was perhaps just as well because they contained some glaring design problems.

These were a large cars at around 20 feet long and with seating for seven people. Much of the design work echoed aeronautical practice. They were streamlined with even the underside covered in sheet metal in order to decrease drag. With independent suspension all round, hydraulic brakes, and even a heater fitted they were, in 1930, very advanced vehicles indeed. The spare wheel was actually carried within a rear door with the opposite door used for other purposes such as a cocktail cabinet. Very innovative!

There was a major problem however with the engine.

Initially an Alvis engine was fitted to the rear of the car but this gave inadequate power for such a heavy vehicle. A straight eight cylinder three litre twin cam engine was fitted with twin radiators, again to the rear, but this created two problems. Firstly the weight distribution in the car was poor with so much of it over the back wheels, causing massive steering issues; and the second problem was that the engine, housed in the tail of the car, received too little cooling and was prone to overheat, giving a risk of fire.

Apparently the car could reach the dizzy height of 80 mph but given the unstable steering it would have taken a very brave driver indeed to attempt that.

The cost of this car was colossal at the time and there were only 12 built, one of which was sold to the Prince of Wales. Thanfully he was never incinerated in it. Sadly there are no known survivors of this initial batch of 12 cars, which were created between 1929 and 1931. The Crossley Car Company took up the project again in 1933, substituting their own six cylinder two litre engine for the heavier original, but sales were still extremely poor and only a further 25 cars were built before production was abandoned.