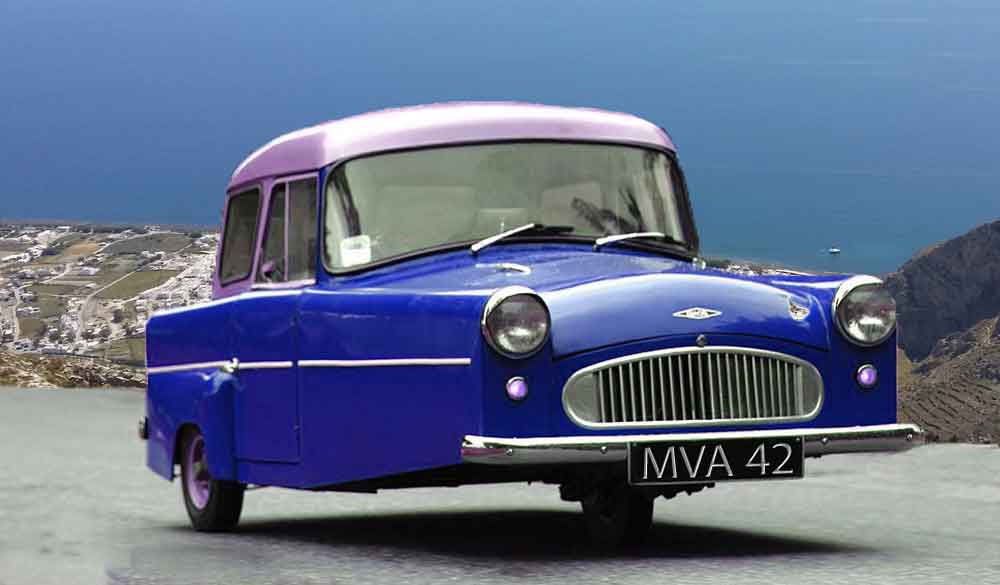 After the Second World War a period of austerity was inevitable and petrol was in very short supply. Not surprisingly there was a demand for lightweight vehicles that could provide personal transport whilst sipping fuel in as miserly a way as possible. The Bond Minicar was the unfortunate progeny of this situation.

Three wheeled vehicles started to become very popular, because the government in their wisdom taxed them as motorbikes and not cars, and they could be driven by people with just motorbike licences. Amongst others, an engineer named Lawrie Bond started to construct lightweight three wheelers with tiny engines, which stretched out the precious fuel supplies as much as possible. These were very basic cars indeed; Bond's first creations didn't even have a rear suspension. However at a price below £200 and with a low taxation level they were very popular. Fair enough performance was not exactly exhilarating; a single cylinder 200 cc two-stroke engine is not the most powerful one in the world but at least it enabled owners to get from A to B with reasonable weather protection, and it could cruise at about 30 mph with a top speed of perhaps 60 mph with a decent tailwind. So far so good.

Lawrie Bond had been an aeronautic engineer during the war and had become quite familiar with the use of aluminium, which was used for the bodywork initially, and his cars were amongst the first to use fibreglass body panels. He had gone into partnership with a military vehicle manufacturer called Sharps Commercials which, like many other post-war engineering companies, was looking for new products to build and together they steadily developed their brainchild.

By 1957, with rising expectations, the original design was starting to look somewhat threadbare and so a larger car, the MkE, was designed and a prototype built. This was roomier and more comfortable than it's predecessor (although this was not difficult to achieve) but there was only one real problem with it; it really didn't like corners. Tipping over was far more likely than sweeping gracefully around a bend. Redesign was necessary; it was made shorter and wider and by 1959 it was reasonably stable provided that speeds were kept low and there were no strong crosswinds!

This was economy motoring writ large. the Minicar was extremely basic, uncomfortable, unstable and downright dangerous if driven by anyone with a sense of adventure but it was cheap and economical and so production continued until 1966 by which time more than 24,000 of them had been built. The final death knell was sounded by a reduction in purchase tax on cars to a level which matched the tax on three wheelers; and this took away their main selling point. However, Despite their obvious drawbacks, they are still much loved by a tightly knit group of enthusiasts.